US President Barack Hussein Obama is known for his charismatic speeches and sociable behavior.

On Tuesday, January 5th, 2016, he made a moving speech on gun controls in his first working week of his last calendar year in office.

According to the Huffington Post, Obama gave a speech on his proposals at the White House on Tuesday, where he was joined by former Rep. Gabrielle Giffords (D-Ariz.), who was shot in the head along with 18 others at a supermarket in Tucson five years ago this week. The president was introduced by Mark Barden, the father of one of the 20 children killed in the 2012 shooting at Sandy Hook Elementary School in Newtown, Connecticut.

He emphasized a point he has made after the many mass shootings that have occurred during his presidency, saying that America is “the only advanced country on Earth that sees this kind of mass violence erupt with this kind of frequency.”

“Somehow, we become numb to it and we start thinking, ‘This is normal,'” Obama said.

“Instead of thinking about how to solve the problem, this has become one of our most polarized, partisan debates,” he added. 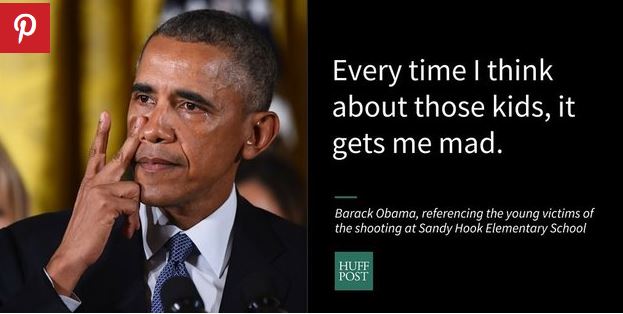 The series of proposals, which the administration first unveiled on Monday, are designed to shore up holes in the federal background check system for gun purchases, devote millions of additional dollars to mental health services, and kick-start so-called smart gun technology.

Republicans denounced the proposals before they debuted as inherently unconstitutional, foreshadowing what will likely be a contentious legal battle.

“This is a dangerous level of executive overreach, and the country will not stand for it,” said House Speaker Paul Ryan.

Cameras flashed in a frenzy as President Obama repeatedly rubbed his eyes and became extremely emotional.  The amount of over emotion, the crooked camera angle, and this appeal to emotion and frustration of having to stand on the bodies of dead children brought tears to President Obama’s eyes.

While calling for “common sense”, and other fallacious comments which hinge on ad hominem attacks of those who value second amendment rights, President Obama listed multiple plans as he called for the ban of firearm sales based on various criteria.