An unnamed Kenyan man has become the recipient of acerbic curses from an infuriated lover who bumped into used protection and an odious piece of tissue paper in her house after the fast and loose man engaged another woman in ‘acts of the rod’.

The man seemingly lied to his ‘mpango wa kando’ that he owned the well-furnished two-bed roomed house he took her to-a house that actually belongs to his girlfriend.

From the WhatsApp screenshot we have obtained it appears that upon reaching his girlfriend’s apartment, the man had a wild time with his side dish, leaving behind evidence of the illicit relations.

“Those are things you left behind in the other bedroom. You were shamelessly [expletive] in my house! You couldn’t even discard your [expletive] after you were done disgracing my house,” began the enraged woman.

The infuriated main chick, in her rant, accuses the wayward man of hiding her shoes under the bed to get rid of the indicators which could have given him away, had the ‘clande’ asked about the female footwear.

It seems that the jilted woman had her suspicions about the identity of her boyfriend’s side chick, as she asks whether he was engaging in ‘horizontal acrobatics’ with Jerida or Rose [surname withheld].

“The devil in you craving to [expletive] every [expletive] will kill you! Which [expletive] was it? Jerida, right? Or the same Rose [surname withheld]?” inquired the main woman, before adding: “Shame on you!”

In a span of ten minutes the angry woman sent him 15 messages, which he did not respond to – even once, despite two blue WhatsApp ticks indicating reception of the messages.

In a rather harsh and bitter tone, she cursed: “May you burn in hell kabisa and all those girls you [expletive]. You are so shameless!.”

Seemingly the two were indifferent for a better part of 2015, and issues often rocked their love boat.

“I started the year (2016) with very clear mind, had forgiven all from my heart. This was the best start for me since 2011,” she added, indicating that the man has ruined her year.

The screen shot ends in an authoritative Swahili question: “You told her (clandestine) hii ni nyumba ya nani?” 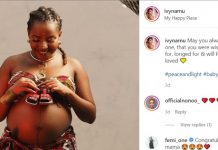