It is 29th August 2017, 21 days after we voted. All the results are in and as expected yours truly is Member of Parliament for Nyeri Town Constituency and Uhuru Kenyatta has been re-elected for his second term as President of Kenya. What surprised most was that Uhuru got 65% of the vote! The other surprise was Raila Odinga conceding defeat, and congratulating Uhuru on his victory!

But how did Uhuru win so decisively?

First, he was the better candidate. Uhuru was better looking, more energetic and more charismatic than any of the other 7 candidates who run against him. Then during his first term we saw that being President was a public responsibility to him, not an entitlement. This humility, when contrasted with his competitors who even whilst outside the presidency showed a distinct love for the perks that come with high office (including fussing over security, red carpets, cleared roads for their motorcades, etc), put him ahead of the pack.

Second, he ran a much better campaign. In 2013 the Jubilee campaign was scientific. It identified the number of votes needed for victory and went out and got them. In 2017 they stepped up the game by first managing to keep their vote-blocs in central Kenya and Rift Valley intact (even rebels in the Rift Valley were not willing to vote outside UhuRuto). The formation of the Jubilee Party was a master-stroke because of how it affected Coast and Kisii Nyanza votes. Then there was the strategic partnership that brought in the Lower Eastern vote-bloc; which was brilliant. Finally, supporting a Westerner as Nairobi governor helped consolidate the western bloc superbly.

Third, the competition was lost. Cord’s disintegration a few months to the elections was quite interesting to watch. I know I had predicted that the coalition would not last till the 2017 elections as early as 2015, but even I had not foreseen how brutal the fallout would be. The idea of making Mudavadi a compromise candidate was really not well thought out. However how Mudavadi dealt with it was also quite odd. I also found it amazing that Mudavadi seemed to have learnt absolutely nothing from his experience with Uhuru towards 2013. How else does one explain that exactly the same thing happened with Raila in 2017!

Fourth, Uhuru surpassed all our expectations during his first term. He not only built Kenya physically (SGR, Last Mile Electricity Connections, Huduma Centres, security installations, etc), he also built Kenya ‘emotionally’. It felt good to watch world leader after world leader, delegation after delegation, troop to Kenya. It also felt good to read about all the youth and women whose lives had changed because of AGPOA. Then it felt terrific when the bank did not make more money than me from my business. In fact that one moment when he took the side of ordinary Kenyans against bIg banks was what sealed it for most of us. Which other candidates would have agreed to pass a law that adversely affected them at a personal level, for the greater good? Uhuru’s first term made us realize he ‘felt’ us.

Finally, Uhuru made us feel safer. Jubilee Party nominations were peaceful (as compared to the violence we saw in ODM). His campaign was also not angry, or desperate, or insulting. By the time we went to the ballot we knew who would keep Kenyans together, and who would not. We voted accordingly.

Congratulations Mr. President. I look forward to working with you as I serve the Nyeri people. Special thanks to Raila as well. Your concession speech was excellent and helped Kenyans move forward together, after that bruising election. 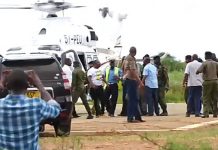