A chaotic scene erupted near Masinde Muliro grounds in Mathare, Nairobi, where the Orange Democratic Movement (ODM) party was holding a political rally.

A group of rowdy youth went on a rampage and burnt a vehicle that had allegedly knocked down a pedestrian in the area.

Led by Mombasa Governor Hassan Joho and his Nairobi counterpart Evans Kidero the Opposition was taking its celebrations to mark the party’s 10th anniversary to their supporters in Nairobi.

On his part, Kidero, who made a majestic entrance in his official government vehicle, said that ODM was not willing to sit and watch their people, “being left to suffer”

At the same time, Jubilee was also holding a parallel meeting at the adjacent location in Mlango Kubwa area.

Here are the photos- Courtesy of Citizen TV: (Part of Royal Media Services) 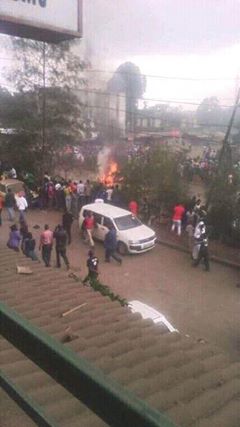