First Lady Margaret Kenyatta has missed all events for a whole month. Today she officiated an event at statehouse looking lovely and energetic. Here is part of the statement released from statehouse. Kenyans had really missed her. 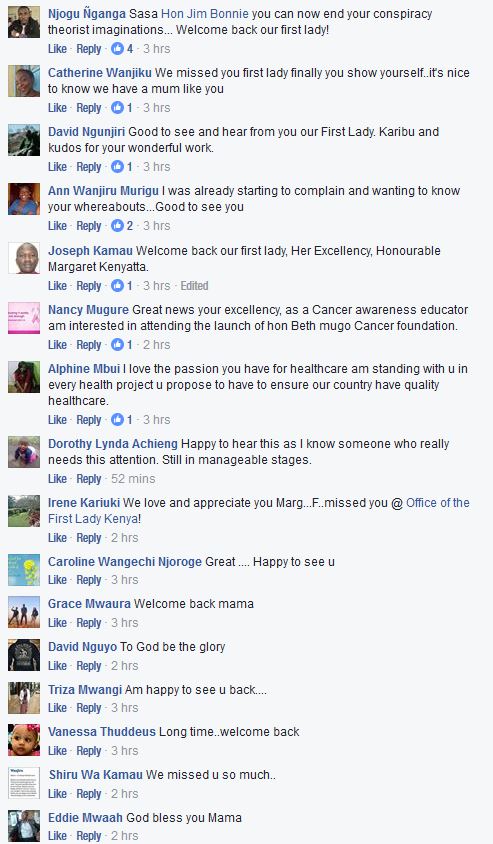 Here is the statement from statehouse: First Lady Margaret Kenyatta today met with top officials of Roche Group who gave a strong commitment to strengthen initiatives to combat cancer in the country. The Roche team met the First Lady ahead of next  Monday’s launch of the Beth Mugo Cancer Foundation  where the  pharmaceutical company is  a key partner .

The Roche group which was led by the firm’s chairman Dr Christoph Franz said his company is  ready  to collaborate with willing partners to ensure all cancer patients access medicines and care. Senator Mugo, a former Minister for Public Health and Sanitation is a cancer survivor who has declared her status publicly to both create awareness and give hope to other people battling with the disease.

Roche Holdings is Swiss Multi-national Health care company that operates worldwide under two divisions- Pharmaceutical and Diagnostic Divisions. Before meeting with the First Lady, the Roche team met with Senator Mugo where the senator also signed an earlier Memorandum of Understanding between the Group and the Ministry of Health where the Pharmaceutical firm agrees to strengthen the country’s war against cancer through capacity building,  diagnostics and drug access to patients.

In the MOU, the Roche group has committed itself to provide the globally acclaimed cancer drug Herceptin  at 50 per cent reduced price.

A full dose to cure  cancer  using the drug costs Sh 1.5 million per patient but Roche has committed itself to offer the medicine to Kenyans at half price.

Swiss Ambassador to Kenya Dr Ralf Heckner said Kenya can be a regional hub and a destination for those seeking medical care for cancer.

He lauded the First Lady for “walking the talk” and giving  leadership on matters of health through  her highly successful  Beyond Zero initiative.

This is the person who killed my son, FIDEL ODINGA –...