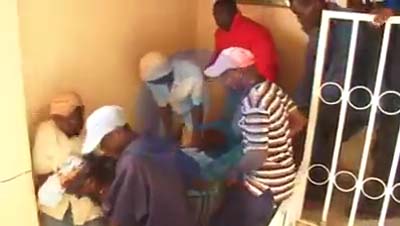 Business came to standstill at Daraja mbili market today after a man was allegedly found with his clandestine lover in a lodging stuck together. This attracted a very large crowd bringing the whole town to a standstill.

According to witnesses, the two were had booked a room at West Gauge Bar near Daraja mbili market apparently to make love but their mission was cut short when they stuck together in the process.

It’s believed a husband to the woman had sought the help of a traditional “Wichcraft” who gave him the medicine to trap the two after realizing that the wife was unfaithful to their marriage.

Daraja mbili residents expressed their sock over the incident.

Photos of the Lady that has Cost Senator Mutula Kilonzo 10Million