Dr James Nyoro has officially declared that he will be contesting for the kiambu CEO come 2017 with the Jubilee ticket.
Speaking at Nyathuna PCEA church where the church was commissioning new leaders.
Nyoro said he had a good vision for the Kiambu and it is a good time for it to be realized.

For the years he was away he has been advising the president on food security and have moved to different countries to advice them matters food.

He also added that Kiambu needs a governor who can move together with the president that he can source goodies for the county. 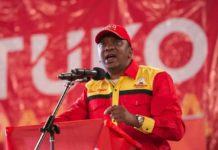 LIST: The men and women who make up Uhuru’s campaign team

Uhuru gives Raila Odinga a dress down, see how Raila has...