The number of people who died on Saturday evening when a truck carrying inflammable substances rammed into several vehicles before bursting into flames near Karai on the Nairobi-Naivasha Highway has increased to 40, deputy county commissioner Isaac Masinde has said.

Witnesses at the scene said the driver of the tanker lost control and hit the other vehicle which created chain of knocks.

The accident on the busy highway, some 80 kilometres west of Nairobi created a horrible scene.

NTSA boss Francis Meja confirmed that 14 vehicles have been burnt, adding that one is a PSV and the rest are private.

The matatu was carrying 14 passengers, who have all perished.

The late night accident also caused heavy traffic snarl up along the busy highway, with other motorists diverting to the alternative Mai Mahiu route.

The actual death toll could be higher given the number of vehicles involved.

The tanker, which was coming from Nairobi, was negotiating the hilly part of the road, before knocking a matatu and exploded into flames. 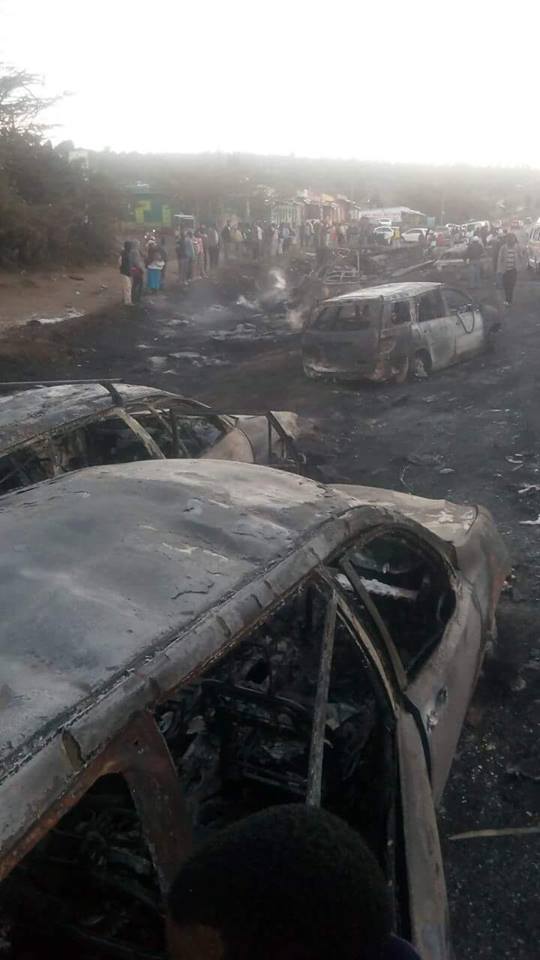 Last night, as a result of a grizzly and unnecessary accident, some 33 people were killed along the Naivasha-Nakuru Road. Scores more people were injured and are admitted to hospital.

The fatalities included 11 officers from the General Service Unit (GSU) who provide VIP protection, including to His Excellency the President.

President Uhuru Kenyatta wishes to express his condolences to the families of all the bereaved, including the young families of the gallant officers from the GSU. He also wishes all the injured quick recovery.

The President’s thoughts and prayers are with the families of those who have lost their lives. He joins all Kenyans in praying for the families affected, that they have the strength to overcome this tragedy.

The President notes that the tanker responsible for the deaths should not have been on that particular road at that hour, and he expects the agencies responsible for enforcing traffic regulation to fully investigate this tragic breach.

Yet another tanker accident kills 5

Here is the huge amount of money that victims of Ethiopian...

Reckless boys! See how drivers of the cars that crashed in...