Passengers are being drugged and robbed.

At times, the drugs reduce you to a zombie.

Read this post in the next page and stay alert. 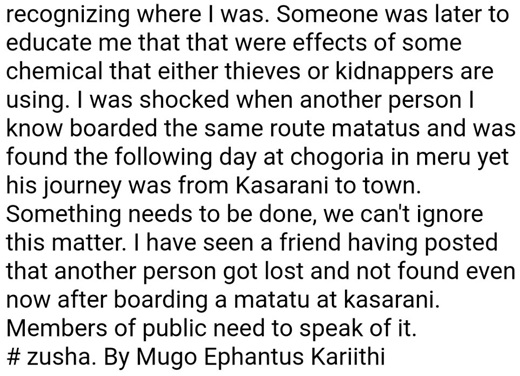 Kenyans let us be careful about the Kasarani mwiki route matatus, many people are been reported missing and the story is the same… “was seen last boarding a matatu at kasarani ” some investigations need to be done especially on this SML buses. I boarded on some months ago from mwiki heading to town. By the time I got to town I had an experience I have never had in my life. Nairobi looked Mombasa. I didnt know which part of town I was in and had to stand for close to thirty minutes before recognizing where I was. Someone was later to educate me that that were effects of some chemical that either thieves or kidnappers are using. I was shocked when another person I know boarded the same route matatus and was found the following day at chogoria in meru yet his journey was from Kasarani to town. Something needs to be done, we can’t ignore this matter. I have seen a friend having posted that another person got lost and not found even now after boarding a matatu at kasarani. Members of public need to speak of it.
# zusha. By Mugo Ephantus Kariithi

Differing Opinions:
MSL I doubt .. These are the best buses on this route. I have always used them and I like them . Could this be a smear campaign by competitors ?

Msl is bae! the managment please investigate these claims n come clear. We need to be assured of our safety as we promote your business