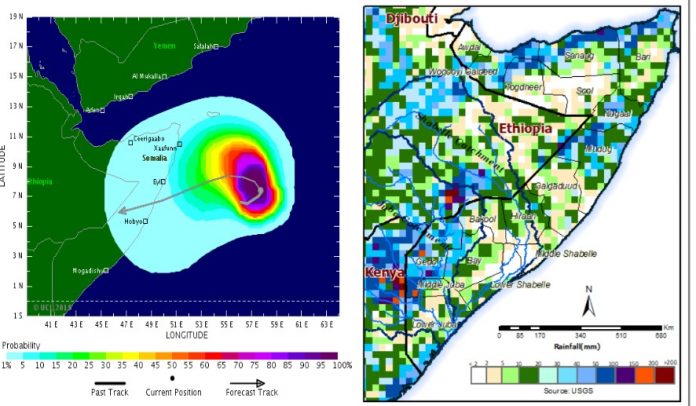 Following a brief quiet spell, the Indian Ocean is set to explode with tropical activity this week as multiple cyclones may develop.

The development got underway on Monday as a tropical depression developed to the east of Somalia.

Up to four additional tropical cyclones may develop across the northern and southern Indian Ocean before the end of the week.

A Tropical Storm currently centered in the north Indian Ocean near the coast of Puntland is expected to intensify further and move in a south western direction and cross Mudug coastal areas between Hobyo and Eyl districts on 06 December 2019.

Under its influence, moderate to heavy rain are likely to cause flash floods in some regions including Mudug, Nugaal, Bari and Sanaag starting on 06 December 2019.

The storm is expected to land in Kenya from Saturday 7th Dec 2019.

Strong winds associated with the storm may cause destruc-tion of weak structures and fishing gears along the coast.While current forecasts indicate a low probability for the cyclone (10%), if the cyclone makes a landfall, it could have a devastating impact. This is why SWALIM is issuing the Alert. Communities along the coast are advised to take necessary precautions in the coming days.

Wachira Waruru Takes Over As The New Chairman of Media Owners...