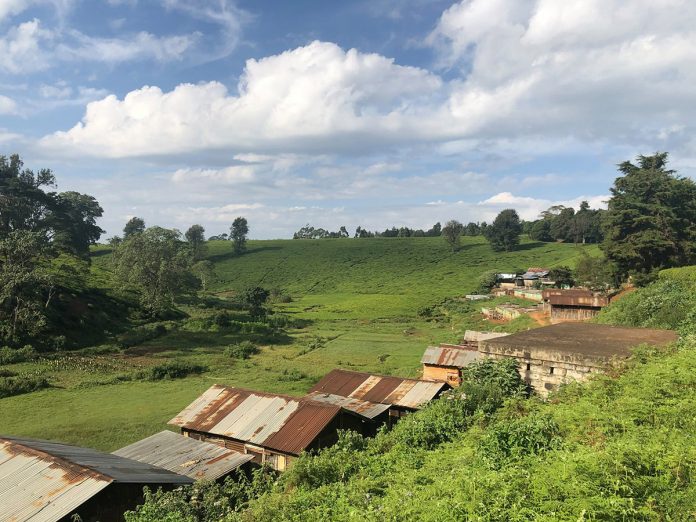 I have seen the lush tea farms of Tigoni, while passing through the area and have even visited one. Tigoni is in Kiambu County, the County that has given Kenya two presidents, as well as the most feared colonial home-guards and collaborators. It’s the County whose sons were at the forefront of working with the colonialists to defeat the Mau Mau and which, for this act of betrayal, was rewarded with the presidency by the colonial British. It’s home to Kenya’s most famous traitor, a man who stole the name of a country – and made it his own – in addition to 500,000 acres of prime land. The sins of his family are the reason Kenya is one of the most corrupt and poorest countries in the world.

So, some adventurers we have hiked with over the past three weeks, organized a Tigoni hike. They sent beautiful pictures of the proposed hike and l eagerly signed up. As the walk began, I noticed that the scenery was as picturesque as a post card. I met a man walking a very exotic dog – it was his master’s dog. We passed through beautiful mansions, located in the middle of vast tea plantations – you know, one of those places you wouldn’t mind being quarantined inside of forever. The view is to die for. Inside the compounds of the mansions we saw very healthy dogs and the cows looked so healthy and clean, it’s like they visit the dry cleaners every day. I saw brown and white cows that looked like royalty, with their udders full of milk.

Tigoni is part of what was known as the White Highlands, agricultural lands in Kenya reserved for European settlers only. The original inhabitants of Tigoni were forcibly uprooted and dispersed to settle in other parts of Central Kenya and the Rift Valley. Through bribery, the colonial government was able to convince a few of the local elders in Tigoni to move out, in exchange for large tracts of land in Lari area of Kiambu. The majority of the locals refused to move, however, and so the British settlers forced them off their land by burning their homes and livestock. Many were pushed to the fringes of Tigoni, ending up living as squatters, with some later being compelled to work on the new tea farms. Their land was stolen from them and they never forgave the collaborators who sold them out. To add to the tragedy, over 600 of them would later be slaughtered by the British – in what is famously known as the Lari massacre – as retaliation for their role in the planning and killing of some of the collaborators and their families.

The stolen land has been farmed with tea for over 100 years now. You can tell that the owners of the tea farms have been doing extremely well, because of the size of the workforce you see and the fact that Kenya’s most valuable agricultural export is tea – Kenya accounts for 22% of the total amount of tea exported worldwide. In 2019, tea contributed Sh117 billion towards the country’s GDP and accounted for 26% of export earnings. It’s a billion-dollar-industry that continues to benefit British companies, still farming on land stolen from indigenous Kenyans. When Kenya gained its independence, some settlers sold the land they had stolen and, flush with money, returned to Britain to live out their retirement years. However, those they sold the stolen land to, were not the children of the original, displaced owners, but those of the collaborators and home-guards who had helped to evict their parents.

The current owners of the tea farms – children of white settlers, companies, and local Kenyans – behave like the racist colonialists who originally stole the land. This is my conclusion after walking 29 kilometres through those farms. l saw the houses that the workers live in, the latrines they use, and it was so dehumanizing. Tea pickers on the larger plantations are housed on the property, but some of the living conditions are deplorable. A company making billions of shillings should be able to pay their workers well, build for them proper housing and ensure they have dignity in their work. The poverty l saw among workers is a clear indication that the billions earned don’t trickle down to the workers. One of the tea pickers told me he is paid a meagre 8 shillings per kilo and, on a good day, he will pick 37 kilos of tea leaves. He, therefore, takes home a maximum of 300 shillings, and not every day is a good day. The children of tea workers walk long distances to attend local public, or subsidized missionary, schools if they’re lucky, and it’s possible for three generations of one family to end up working on the same tea farm. There is no incentive to build schools on the large tea plantations, because of the logic that says if the children get a good education, who will pick the tea after their parents have grown too old?

The land barons of Tigoni tea farms are just a reflection of any large-scale capitalistic investment. From large-scale wheat farmers, cattle ranchers, flower farmers, companies like Delmonte, Kakuzi, or the Indian factories in Nairobi’s Industrial Area and other urban towns, every enterprise, whose focus is profit above everything else, has a mission to milk its workers dry; to exploit and keep them desperate enough to ensure they will continue to elect greedy leaders who take bribes instead of fighting for their rights.

Decent accommodation should be a right for every worker. If a company cannot provide basic sanitation, then that company should cease to exist? We know the champion of workers is anything but, since he wakes up every day to take bribes from companies that exploit workers and then uses that money to buy political favours. He is the Mugabe of trade unions; whose home is a hotel so that he can host big delegations. The last person who dared challenge him was shot dead, along with three others. The State executes his opponents.

I know a lot of the Kenyan cowboys, white Kenyans, black Kenyan elites and Kenyans of Indian origin read my posts. They enjoy it when l expose corruption, but the majority will admit that the status quo favours them. They can get cheap labour, they can evade paying taxes, they can live first-world-lives with private security, fierce dogs and electrified razor-link fences protecting them. If you worship God, which God allows you to exploit people so brazenly?

This post is dedicated to a patriot, Jaramogi Oginga Odinga who resigned as Vice President in 1966, when his duties were distributed to other cabinet ministers and he said he couldn’t justify earning a salary after that. He spent his entire life fighting for democracy and never sold out. He wrote a book, Not Yet Uhuru, in 1967 and those words still ring true in 2020. It’s not yet Uhuru. #TeamCOURAGE

PS: If you or your parents worked in a big Kenyan factory or one of these large farms, please share your experience in the comments section.