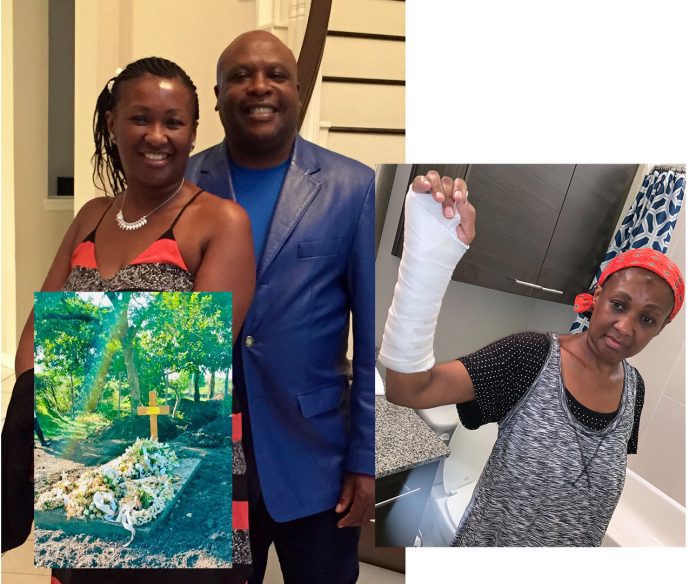 Domestic violence-related cases have been on the rise in the country, with those lucky to have survived coming out to narrate their stories. Sometimes, however,  it is too late for some who never live to tell their stories.

In an emotional Facebook post, former Director at KTN, Patrick Odhiambo Ndeda has been accused of domestically abusing his wife, Esther Winter Ndeda and sending her to an early grave.

The stepdaughter to the deceased,  Vanessa, has penned down an emotional post with a side by side picture of the deceased mom and Ndeda alluding that the couple painted a picture-perfect couple yet abuse was going on behind closed doors.

“I have never been one to pen my heart out but my heart is beyond crushed … a lot of times rattled with anger and helplessness. I can’t get any justice for my mom but I can at least be honest about what we all went through …,” she wrote.

Further, she continued, “Great couple right …. many people knew mom as Esther Winter, Winter Ndeda … it all depended on what name Patrick wanted her to use. Yeah, that’s how much he controlled my mom. To me she was just mom, my everything.”

Vanessa intimated that the late mom had been abused on several occasions, with her abuser, Mr Ndeda controlling the people in her life and even forcing her to cut contacts with her family.

For instance, she recalls an incident where her mom was beaten up leading to falling into depression and becoming a drunkard.

In yet another incident, Vanessa claims her mother was roughed up and left unconscious on the floor and was later forced to go out and make deals while creating a perfect picture of their marriage

“Last year was supposed to be the start of a new life, she ran away after he beat her up leaving her lifeless on the floor saying he would come and quote ‘finish her’. He then went to lunch and to take a walk “creating a perfect alibi”. My mother called me screaming, my whole family rallied up to get her out of there … oh, this made him mad. What’s will happen to his Reputation? What will I tell people? Winter went on vacation .. winter went out to business…. NOPE ! how about I beat up Winter so bad! By Gods grace we got her out before he came back,” read the post.

Notably, Vanessa faults the police authorities of failing them since the family had made complaints and reported the matter with their efforts to seek justice being futile.

” I feel like the Kenya police failed us, even after filing a report nothing happened. It’s like paperwork that’s just stored. Nobody fights for women. Does someone have to be dead to get attention? I’m just tired… I really am. My life has been one heck of a rollercoaster. My mom deserves a voice.,” she wrote.

Online reports indicate that abused women tend to stay in violent marriages longer due to the stigma that comes about with victims speaking out. Many are lucky to come out alive, while other’s get their stories told while six feet under.

There have also been increased cases on domestic violence during the Coronavirus pandemic due to the ban of movement and lockdown restrictions.

Saitan! Meet the renowned gospel singer who has been allegedly sleeping...