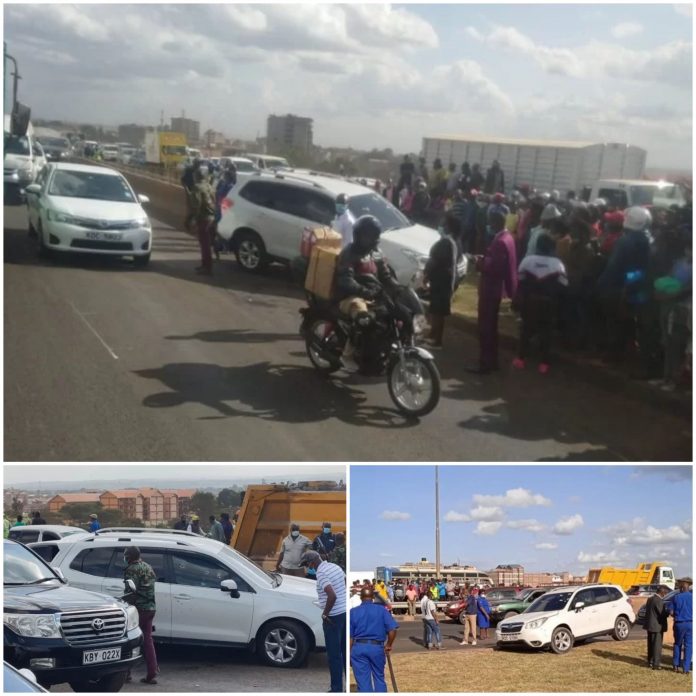 Daniel Gucoma, the 36-year-old man who was brutally murdered along Thika Road after his Subaru car was sprayed with 25 bullets was a notorious gangster.

It has now emerged that the slain man led a gang that was involved in serious crimes within Nairobi and its environs and even beyond.

In March 2017, Daniel and his gang members were involved in a failed bank robbery in Eldoret town.

They raided Equity Bank that is located at Poa Place in Eldoret town and disarmed police officers who were guarding the bank but their mission flopped after they got wind that the area had been surrounded by police officers.

They escaped before committing any robbery at the bank.

3 of the gang members were later arrested along Eldoret-Nakuru Highway by police after a dramatic chase and three guns and a Toyota Harrier with a fake number plate recovered from them.

Daniel and his gang members also faced another robbery case at Makadara Law Courts after they robbed a businessman of his lorry and 300 gas cylinders on June 14, 204 at Sunton area in Kasarani, Nairobi County.

They were charged at the Makadara Law Courts for the robbery with court documents indicating that they robbed the victim of his Ksh 117,000 and two mobile phones.

Gucoma also faced another case in court after he was accused of hijacking a lorry that was loaded with laptops, clothes and mobile phones worth Sh 60 million.

Some of the stolen goods worth over Sh 30 Million were recovered from his house in Kiambu County.

Despite facing serious criminal charges, Gucoma jumped bail and continued terrorizing innocent Kenyans even after several warrants of arrests were issued against them.

It’s suspected that he was enjoying police protection.

Gucoma was sprayed with bullets near Spur Mall along Thika Road by unknown assailants who were riding on a motorbike.

PHOTOs of S£XY NJERI, a lady who was shot dead by...