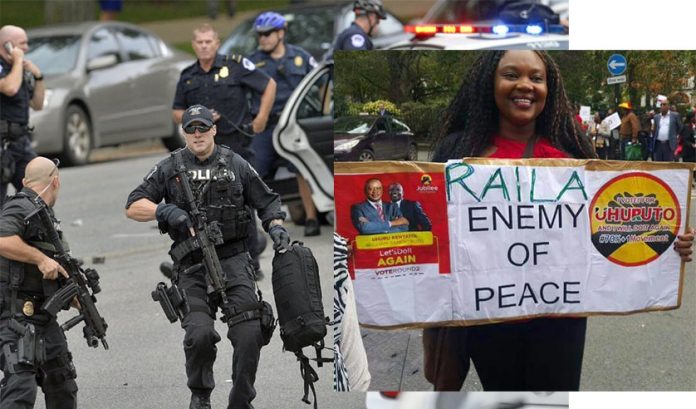 Showdown is looming in Washington DC between NASA supporters in the US and Jubilee supporters as NASA/NRM leader Hon Raila Amolo Odinga begins a 5-day visit to the United States today. The NASA leader is scheduled to address the Center of Security and International Studies (CSIS) on Wednesday morning where he will give a lecture explaining his reasons for withdrawing from the October 26th election, outline his next steps and offer his prognosis for Kenya’s democratic health, peace, and stability under the topic “Overcoming Kenya’s Political Crisis and Advancing Democracy, Rule of Law, and Stability“. Then later meet the House and Senate Congressional Committee for an address.

Word has it that NASA supporters are in hunt for flights to Washington DC from across the USA as an SOS sent to Jubilee supporters purportedly by Ambasador Robinson Njeru Githae urging them to show up in large numbers to protest against NASA leader Raila Odinga was leaked out and spread across the country.

Washington DC police and Maryland Police have been placed on heightened state of alert as word went out that there could be protests and possible ethnic confrontations. They however, said that they will protect both side’s rights to picket during the protest.

This beautiful Lady and her father are dangerous criminals, they killed...