Amani National Congress (ANC) leader Musalia Mudavadi has finally agreed to join the Coalition for Reforms and Democracy (CORD). The congress on Friday, October 21 approved the formation of an alliance with CORD indicating the possibility of fielding a presidential candidate for 2017

Mudavadi said the ANC party would like to engage with the opposition to form The National Super Alliance (NASA).

“The National Super Alliance (NASA) or Muungano Maalum is a serious debate we would like to engage in particularly with those in the opposition. The whole idea is to have a more inclusive and robust political dispensation,” said Musalia Mudavadi. 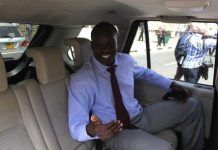 Mudavadi for president, a comprehensive review