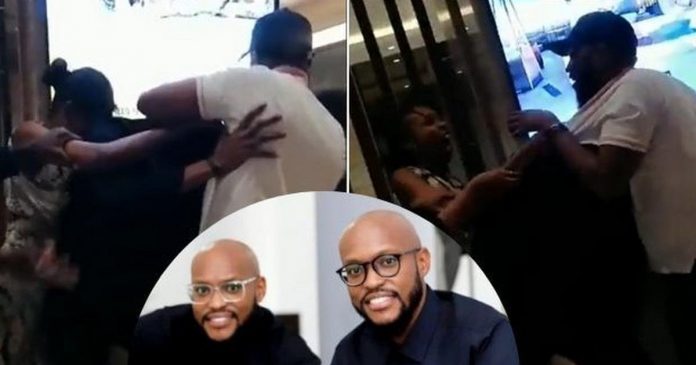 Controversial Ndichu twin brothers, Eddie and Paul, are trending on social media after they caused a fracas at Ole Sereni Hotel over the weekend while drunk.

An anonymous staff member, who works at the lavish hotel, has spilled more beans on the ugly incident.

Speaking to ‘Tea Master’ Edgar Obare, the staff member, who witnessed the drama, revealed that the twin brothers had booked a room with four ladies before the incident.

Eddie sneaked out of the room and went to the rooftop bar where he started hitting on another lady, who was in the company of her boyfriend.

He wanted to spend time with the lady but she turned him down and refused to join him in the room.

He caused fracas after the lady rejected his advances and even tried to bite one of her arms.

Janet Mbugua’s husband Eddie Ndichu and his twin brother were involved in a scuffle with some ladies at a 5-star hotel. Maajabu. The way we were told he’s a knight in shining armor at the time of wedding. Madame achangeni Cinderella delusions. Sisi ndio tuko! pic.twitter.com/CUqrQv8pNT

His brother Paul, who was drunk like a skunk, joined him and they continued causing drama at the lavish hotel.

Here’s what Edgar Obare posted on his BNN page.

Merck and Nigeria’s First Lady say No to Infertility Stigma