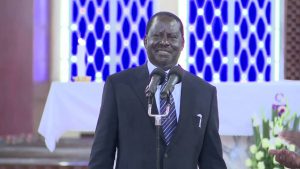 I HAVE NO APOLOGIES OVER REMARKS IN NAROK ON TJRC REPORT:

During the burial of Hon William ole Ntimama on Wednesday, 14th September 2016, I raised fundamental issues touching on historical injustices that communities and individuals have suffered in Kenya and which needs to be brought to a closer through the implementation of the Truth, Justice and Reconciliation report.

My sentiments at the burial and at the church service earlier were in line with the ideals the late Ntimama fought for all his life… the ideals of fairness, equity, justice and freedom…after decades of seeing the Maasai being dispossessed, tossed around and overran, first by the colonialists then by successive post-independence regimes.

Many times in private, Hon Ntimama’s Iltaaroosero Clan, representatives of his Ilnyankusi age group and the Maa Community in general raised the matters of Maasai lands with me. It was important that as we buried Ntimama, we remind the national leadership of his unfinished agenda that must be acted on.

But the issue is bigger than the Maa community. The TJRC report also addresses legal and institutional reforms; land reforms; tackling poverty and inequality as well as combating regional development imbalances; tackling unemployment, particularly among the youth; consolidating national cohesion and unity; transparency, protection of indigenous communities, addressing accountability and impunity. These matters are critical to our future as a nation.

This report has always bee shrouded in controversy. Foreign members of the TJRC committee refused to sign it when some sections were expunged on instructions of some influential figures in government who were fingered by the report. Still, Jubilee remains uncomfortable even with the redacted report, hence the failure to table it for debate.

Yet the report is in the hearts of Kenyans across the country from Central to Rift Valley to the Coast and northern Kenya where land grabbing, massacres, disappearances, marginalisation and other injustices have occurred since independence.

That is why I reminded the Jubilee leadership particularly in Parliament that Kenyans are waiting for the tabling of the TJRC report in its original form and full implementation thereafter.

Strangely, my challenge only sparked off a very strange rage from the President. The Jubilee administration is now claiming the President was provoked and that we are somehow disrespectful in raising this matter.

I raised the TJRC issue as a matter of conscience. I did it as a duty to my country and as part of my deep belief that historical injustices have occurred in Kenya and they need to be addressed as recommended in the original TJRC report.

I have no apologies on this matter and I promise to continue raising it.