President Uhuru Kenyatta was declared winner in the 2017 presidential election with 8, 203, 290 votes translating to 54.2 percent of the total votes cast.

The Independent Electoral and Boundaries Commission Chairman Wafula Chebukati declared the President the winner at 10.17 p.m. Friday after the commission completed the tabulation of the votes relayed by Returning Officers in all Constituencies after 15,073, 662 Kenyans cast their ballots on August 8th.

Mr Chebukati also announced that President Kenyatta garnered at least 25 percent of the votes cast in 35 counties out of the 47 counties.

In his acceptance speech, President Kenyatta, who was flanked by his running mate, Deputy President William Ruto, First Lady Margaret Kenyatta and the DP’s spouse Rachel Ruto, pledged to serve all Kenyans without bias as the Jubilee Administration continues with its transformational development agenda.

He said he will serve all 45 million Kenyans equally as his Government continues with the work to create equitable prosperity for all.

The President also used his acceptance speech to reach out to his main rival Raila Odinga who got 6,762,224. The Head of State said he was extending a hand of friendship and of cooperation to the NASA candidate and all his supporters so that all Kenyans remain united for the progress of the country.

The President also thanked the hundreds of observers for their contribution to raise the standards of the Kenya election. 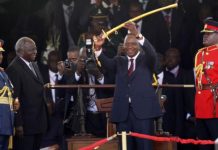 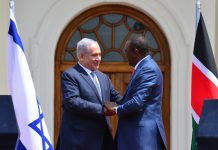