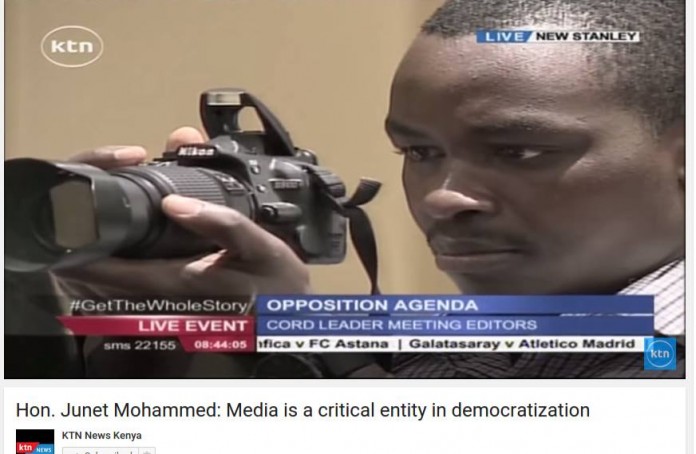 ODM’s blogger Seth Odongo, alias Disembe Dikembe – who was jailed in 2014 over hate speech – is at it again.

The blogger went on his facebook page to rant about how the Kikuyus have taken control of the country and its resources and in the process compared President Uhuru Kenyatta to Satan.

His argument though, is that the Nation newspaper published an article by one Prof. Peter Gitau Kagwanja about former Prime Minister and CORD leader Raila Odinga where he (Kagwanja) interchangeably used Odinga’s and Satan’s names.

I am just wondering if I were to write an opinion piece for Nation using ”satan” interchangeably with Uhuru Kenyatta in the same sentence would Nation publish it the way they are publishing Prof. Peter Gitau Kagwanja’s opinion pieces which use Raila’s name in the same breadth with ‘satan’?

This kind of propaganda borders on hate speech, regardless of how it is clothed. NCIC however is blind to this because it was not set up see this kind of hate speech.

Kikuyu intelligensia peddle hate-speech every day but when you attempt to respond, their repressive institutions embedded in the Kenyan state descend on you with vengeance.

Kameme FM is the home of radio hate-speech but what has NCIC done? People like Kagwanja peddle hate-filled propaganda targeting Raila and his supporters but what does NCIC do?

There is a kind of hate-speech the Germans called ”volksverhetzung”. It dates back to Hitler’s time. People who spew this kind of hate focus on isolated incidences by individuals or deviant groups from the targeted group.

Prof. Kagwanja has repeatedly used the incident by Men in Black in Kasarani, or the pockets of scuffles during Homa Bay by-election, to explain the behaviour of ‘ODM youths’ and ‘Raila supporters’. He uses these isolated incidences to foster a stereotype about ODM as a party and Raila as an individual.

Kikuyu elites have always used this type of hate propaganda particularly on the Luo. Kagwanja knows that it has worked before.

He creates, in the words of journalist Martin Plaut, a climate of ”moral panic” so that those tired of Uhuru regime conclude that there is no ‘alternative’ to it as ODM/CORD is filled with violent people and Raila is ”satan”.

By the way, Kagwanja writes about nothing else but Raila and ODM/CORD. Increasingly, he is being joined by other Kikuyu elites (Anne Waiguru, Jamleck Kamau etc) who, reading their opinion pieces in Nation, seem to know Raila’s ”strategy” than Raila himself. And always, at the heart of this ”Raila’s strategy” is either ‘violence on Kikuyus’ or ‘destruction of the government’. Between 2013 and 2015, everything Raila did was always aimed at ‘impeaching Uhuru’.

Eurobond queries, they say, are meant to destroy Kenya’s economy.

At the height of NYS queries, Raila was the ”lord of poverty” whose intention was to keep Kibera poor. Yet, today, the answer to those queries Raila was asking is over sh 791 miliion which they is is ‘lost’ (polite way of saying ‘stolen’) and a sh 21 billion they’ve refused to subject to a forensic audit.

With every scam in the Jubilee government all Kikuyu elites are doing is to increase kikuyu masses ‘sense of entitlement’ to those very scams, despite not being beneficiaries. This too has worked before. During Anglo-leasing, poeple like Kimunya made their scams ‘kikuyu people scams’ so that calling for his resignation (i’d rather die than resign) positively reverberated in that region. So it is not new that once again, on Eurobond, Kikuyu people are being told to accept that it is ‘their scam’ and so, ‘live with it’ because not doing so would be ‘supporting Raila’ who is ‘satan’.

Nothing however piques me like this Satan allegory. It is just wrong. It shows how far Kikuyu elites want to go with their homestretch scaremongering and fearmongering.

While people like Kagwanja write so disdainfully about ”the others” and has contributed immensely in creating an ”us vs them” mentality that so pervades Kikuyu political thinking to the highest echelons, so that even President Uhuru has the temerity to publicly, and unashamedly, scold poor Likoni squatters in the ”them” category, when the others constitute a formidable ‘them’ to take on the ‘us’ (read kikuyu elites) the same Kagwanjas of this world are the first to accuse the others of targeting Kikuyu masses.

I have gone through the 2007 elections and I wish to be challenged by anyone where ODM formally, publicly and in action employed the so called ’41 against 1′ strategy. Yet, when people like Kagwanja write about the ’41 against 1′ it so freely flows you’d be tempted to ask them, ”did ODM contract you to come up with it”?