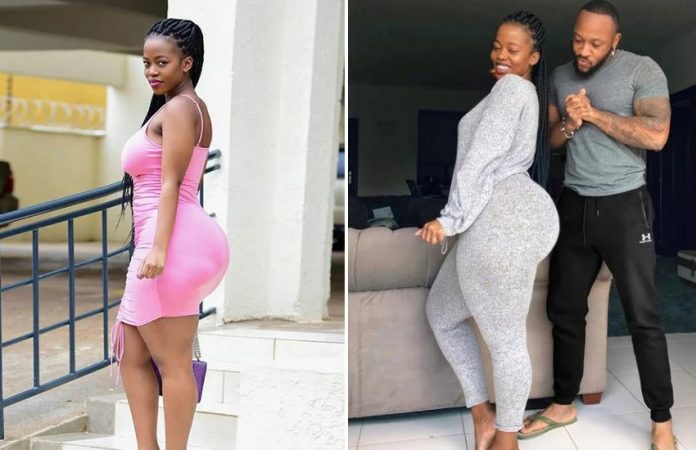 Curvy socialite Corazon Kwamboka is rumored to be pregnant for fitness instructor Frank Kiarie alias Frankie Just Gym It. According to a source who spoke to a local news site, the socialite is said to be six months pregnant for Frank, who is also Maureen Waititu’s baby daddy.

The two have been rumored to be an item for months now as their previous relationships ended, with Corazon saying that she wanted to be a mum in 2020.

About a year ago, Corazon, who is the CEO of Genio Sportswear called it quits with her European boyfriend citing distance.

“I loved this guy! But the distance just couldn’t allow us to be together, it’s been tough and we were not happy. I’m single and happy, focusing on myself and law practice. I’m sure I will find love and when it’s real; it will be easy,” she wrote soon after.

If someone told me January last year that I’d be feeling you kick deep in my belly at the sound of your father’s voice, I’d most definitely think they were deranged! Endometriosis had crippled my dreams of birthing a child. But here we are. A pleasant and welcomed surprise. I can’t wait to meet you. Hold you and teach you EVERYTHING I know. To the baby’s father; I couldn’t have chosen a better person to do this with. I see the good in you and how you raise your own and I know my child will be loved ETERNALLY.

According to Corazon who is also a lawyer, her status as a socialite has been a major hindrance to her law practice.

“It made me not practice law. I feel that at some point, I was being misjudged in a way so I kinda pulled back from the law. I didn’t even want to go look for a job because I was scared ‘how will they even give me the job’ and also it affected a lot of my relationships since I became Corazon Kwamboka the socialite,” she said.

Four years ago, a man claiming to be Corazon’s father accused her of breaking their family while urging her to focus on her law career.

William Ruto seen drooling over a Cabinet Secretary and dancing like...

For The First Time Ever, Citizen TV’s Joey Muthengi Shows Some...

MUST SEE: Who is who? Betty Kyalo’s look alike breaks the...